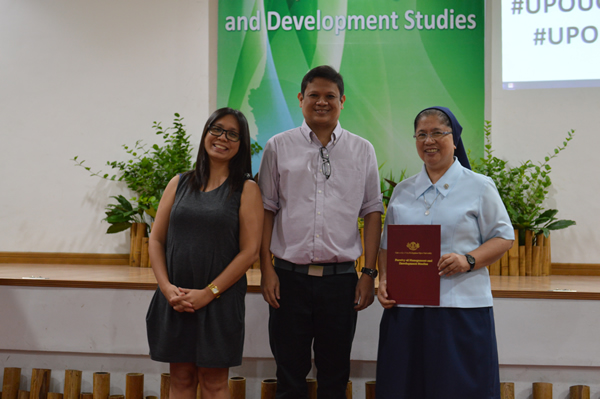 140 bright minds from the Faculty of Management and Development Studies (FMDS) of UP Open University celebrated years of hard work and commitment in the fields of management, health, development, and environment on 29 July 2016 at the Centennial Center for Digital Learning Building (CCDL). They were part of a graduating class of over 361 students from different parts of the Philippines and abroad who have recently completed UP Open University’s online baccalaureate and graduate programs.

Finishing a degree doesn’t end with the students’ last footfalls on stage, but with an added responsibility to serve the country better. Dr. Primo G. Garcia, Dean of FMDS, welcomed everyone with a challenge. He said that “it is now time to make what we have learned matter to the people who matter – the Filipino people.”

This sentiment was strongly echoed by the students and during his speech, Jabez Joshua Flores from the Master of Environment and Natural Resources Management program (MENRM), urged everyone to “use education as an opportunity for application, as a platform for action.” True enough, after the recognition program and the students were able to get to know each other better, a plan was created to develop a consultancy group composed of FMDS graduate students to share their knowledge and lessons learned during their stay at the university. 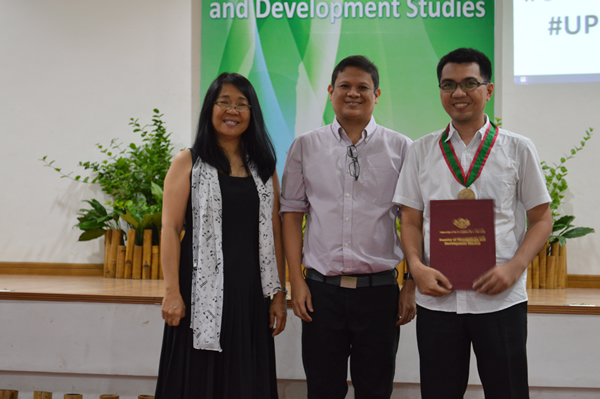 For Jerome Adriano, also a MENRM student, he sees that the most important lessons he learned were time management skills and determination as well as the value in enjoying the whole learning experience instead of drowning in grade consciousness, of being collaborative and not overly competitive as he believed that “the success of everybody is better than being on top of the heap.”

This success might be dressed with a shining medal while holding a crisp certificate or it might just be that proud look on their loved ones’ faces and the feeling that they’ve made it this far against all odds. No matter how many faces success wears, behind it are stories of perseverance, grit and ambition, constantly challenged and questioned by work and domestic responsibilities on top of academic requirements. Diploma in Research & Development Management (DR&DM) student, Paolo Hilado, credits this success to the significant people who gave their unyielding support, understanding and patience during their studies as they balanced work and family duties.

Former Dean of FMDS, Dr. Inocencio E. Buot, Jr. was also there during the recognition to support the students and give his inspirational message. He used the imagery of katakataka touted as the “wonder plant” in his speech. The plant is also known as siempre vivo translated from Spanish meaning -always alive. The plant has been used to symbolize the deep-seated patriotism that is forever growing in the country because of its ability to grow in any ground, even by just throwing a part of it into the soil. In UP, The katakataka is found at the base of the oblation statue and it carries the same meaning of patriotism for the country. Just like the katakataka, the students of FMDS have been inculcated with a commitment to serve the people, take root and flourish anywhere and in any circumstance. Testament to this is Adriano’s plans to continue studying in UPOU for a PhD degree and pass his EnP Licensure Exam. Flores was accepted at UP Los Banos Graduate School for his PhD in Environmental Science and is now enjoying his 1st semester while still managing his organic farm, Cafe Antonio Restaurant, and teaching an online class on Personal Entrepreneurial Development under the FMDS Continuing Education Program. Hilado plans to engage in R&D projects that would greatly contribute to the country’s development through DOST or DOH and then pursue his doctorate degree after three to four years.

Both Paolo Hilado and Jabez Joshua Flores are recipients of the Chancellor’s List award together with Harvey John Garcia from the MENRM Program. Jerome Adriano, who is also from MENRM received the Dean’s List recognition together with Ronald John Autriz from DR&DM.